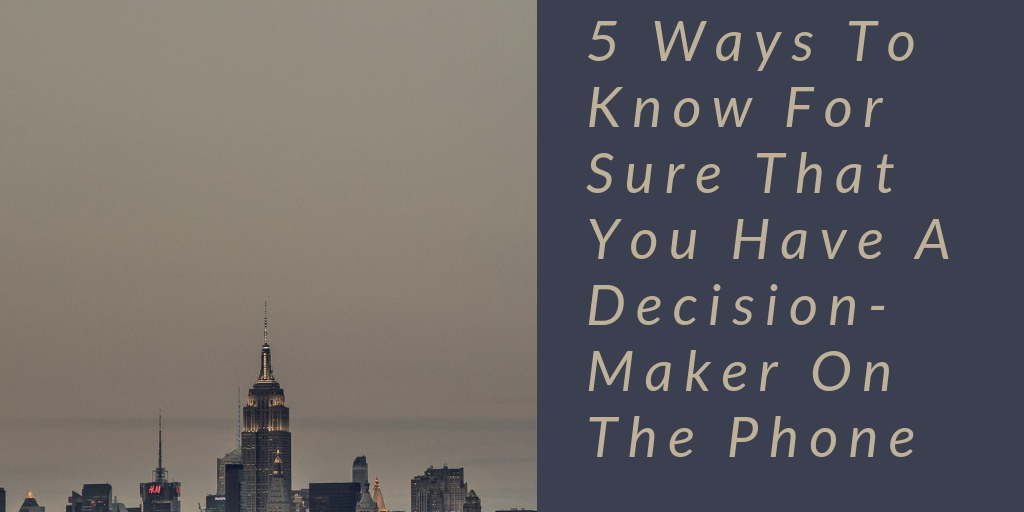 Few things are more frustrating than giving your full attention (and best pitch) to a prospect only to find out they don’t have the authority to make a buying decision. Instead of speaking to a C-level executive, you’ve just spent time and energy with a “See-More” executive who will pass you down the line, forcing you to see more executives.

While you can’t always predetermine who’ll pick up the phone, you can use some tactics to decide early on in the call whether you’re speaking to a gatekeeper, a See-More executive, or a C-level executive.

These tips incorporate work that can be done before and during a call. Find out quickly whether you’re talking to a decision maker by:

If you’re about to prospect a public company, look up their 10k filing or even LinkedIn Sales Navigator. By using advanced search techniques and searching for the right profiles, you’ll likely be able to get a sense of who makes decisions and who you should begin reaching out to.

If the organization is large, and you think there might be a pool of a dozen or so potential decision makers, do a deeper dive into their profiles. Do your homework. If you have tools, use them.

2. Weighing length of service, skills, and endorsements on profiles

While you’re researching your potential decision makers, learn to evaluate the length of time they’ve spent in their current role and the type of endorsements they have. Why?

Because if a VP has been with X company for 3 months, but a Director has been there for 3+ years, chances are the Director will have more influence and buying power… But you wouldn’t guess that from their titles.

You can also cross reference other intel to check for management skills like coaching or training, or whether they’ve received endorsements for the tactical skills you’d need an executive to possess to fully understand the value of the product or service you’re selling.

Once you’re on the phone, ask some indirect questions about the prospect’s qualifications, but avoid being too direct. Most people won’t have the authenticity to admit that they aren’t the decision maker.

Instead, ask something like, “When a decision like this gets made, who’s involved?” or, “Who else on your team would be interested in learning about this?” to initiate a discussion about their own role and next steps.

“How have decisions like this been made previously?” Even asking, “How can I help you share this internally?” is an easy way to suss out who else, if anyone, must get involved before a deal can be done. In short, use leading questions to qualify and determine whether you’re on the line with a decision maker or a ‘See-More’ executive.

Most executives’ schedules are packed. One of the best ways to get a C-level executive on the line is to call during the hours they’re likely to be available. In most offices, that’s before the business day begins and after EOD. If you’re speaking to a prospect during these hours, there’s a good chance they have the authority you’re looking for. After all, what ‘See More’ exec is going to hang around before or after hours?

5. Taking the organization’s size into consideration

As a general rule of thumb, the size of the business will give you a decent hint at the roles with decision-making power there. Remember:

50-500 employees: Look for specialized roles like Sales Manager or Director, Business Development Manager, etc. in an organization of this size.

If you still aren’t sure, pepper your conversation with more qualifying questions like…

“What is the purchase approval process like?” or “Should I be aware of any priorities or concerns from the stakeholders?” Also keep in mind that there may be more than one person with the authority to approve the purchase of your product or service, and you don’t want to insult a prospect’s intelligence by writing them off with a condescending tone or a slightly arrogant line of questioning.

As you make your calls, remember that executive assistants are often treated as second-class citizens. Set yourself apart by speaking to them with respect and treating them as intelligent human beings rather than obstacles you have to overcome on the way to their boss. There’s a way to get through gatekeepers and “See-More” executives with tact and respect, which almost always pays off in the end.

Hopefully these methods help you on your way. The truth is, it can be a moving target trying to get the right person on the phone. But your business and sales numbers depend on it. So we invite you to reach out to us at C-Level Partners. We’d be delighted to share how we can put your in front of the Right People, in the Right Role, Right Now. So get in touch today!