How NOT to be a Sweaty Palm Salesman 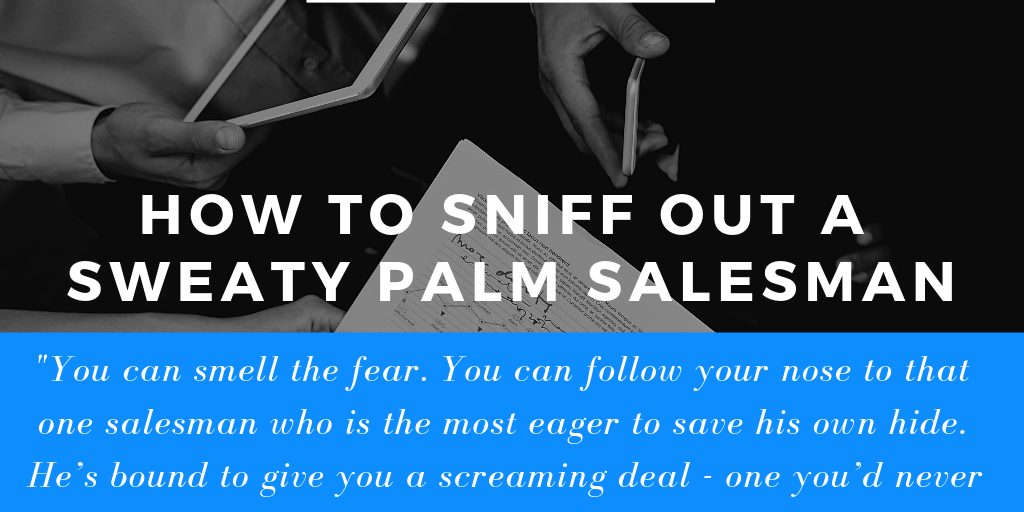 I personally love sweaty-palmed salespeople – or at least I love the deals I get from them. Maybe you’ve met a few. Maybe you even have a few of them on your sales team. If so, you MUST read this entire post.

Of course, not at first – at first they feel like they can take on the world. But give it time…

Soon they’ll reek of desperation. Like a shark smelling blood in the water, the customer or client moves in, and snatches up your entire team’s margin, stripping them of their dignity.

But you can’t blame the customer. It’s become common knowledge that a person can do their best bargain hunting at the end of the year, at the car lot.

Because there’s always a deal to be had when a salesperson is underperforming. It’s a dog eat dog world – and it’s all too tempting to take full advantage.

I’ve played this move more than once. Hasn’t everyone? There you are on the dealer’s sales floor. You can smell the fear. You can follow your nose to that one salesman who is the most eager to save his own hide. He’s bound to give you a screaming deal – one you’d never get any other time of the year. They come down and down on price at an amusing rate. It’s really quite sad.

Maybe you can relate to that poor fellow… the one who starts the year full of hope, but at the end of each quarter finds himself belly up, waving the white flag of defeat. Panting and pandering to every customer who so much as answers the phone or walks into the place.

This one goes out to all those salespeople who routinely end up scrambling at the last minute… and who are making one too many eleventh-hour compromises.

There IS a better way.

What you need to realize is that your quota, and your deadline, can make you act out of character. They are a chemical cocktail for your brain, making you act out of lack. But you can beat it. Let’s break it down.

From Swagger… to Stagger

So, typically the sweaty-palmed salesman doesn’t start off that way. He starts off as the cool, calm, and collected salesman.

He begins the year saying, “I have a quota to sell x amount of services or x amount of revenue in Q1.” But 30 days in, he realizes he hasn’t sold anything. So there he is, with two months left, and he begins to feel a bit nervous.

At the end of month two, he really starts to sweat things. That deadline is just around the corner. He goes into the opportunity thinking, “If I don’t close this sale then…” And visions of his future flash through his mind… and it’s never good.

Enter month three and now that deadline is really nipping at his heels. He’s got nightmare scenarios on his mind — and for good reason! Why hasn’t he hit quota? Who knows… but the lack of sales creates a negative feedback loop. It’s all spiraling out of control for him.

It might be something he just says to himself in his mind, but it shows. It comes across in emails, in presentations, in the way he walks and talks. You can see it in his eyes. You can smell it on his breath. Tie’s crooked. He might as well be wearing a sign on his back: “Kick me! I haven’t hit my numbers!”

And so the transformation is fully complete. He has become the sweaty-palm salesman.

What the salesman doesn’t realize is that his body, emotions, and physiology are all controlled by that one poisonous thought: “If I don’t close this sale then…”

But that’s hackable. It works the other way, too. Instead of saying “if” – say “when.”

“WHEN I close this sale I will…” and suddenly the salesman keys into a high-level of performance.

If you say, “I know I’m gonna close this guy…” Then your body believes you. It says, “Great!” And now it’s no longer a matter of “if” you’ll close the sale, it’s a matter of HOW.

Try it in the mirror. Say, “If I don’t close this sale…” See what that does to you.

Then, try it my way. Say “When I close this sale, I’ll…” Feel that? Get your team to try it. You’ll be amazed by the difference a simple change of words can make.

I saw this all play out recently when a company (who I will not name) happened to call me up, hoping to make a sale.

“When can you make this decision on our software? I really need the decision by End of Year… can you do that?” I smelled it on him. I knew right then the ball was in MY court.

What could he have said instead? Here are a few options:

But instead he said, “I really need to make this happen.”

Sweaty palm salesmen leave a tremendous amount of clues to the prospect. Clues that it’s not a good idea to buy. Look, if you’re nervous… you’re making the prospect nervous.

These clues leave the prospect with just two options:

American speaker, entrepreneur and author Jim Rohn famously said something to this effect: “Circumstances don’t define you… they expose you.”  So, are you prepared to behave constructively, even when your house of cards is caving in?

We’ve all felt that last minute pressure to sell. But when you feel that anxiety rise up, (and it always does) do NOT go into default mode. Instead, rise above it like your life depends on it.

Everyone has KPI’s, metrics and standards that they have to achieve. Want to meet the quota? You can’t be desperate. Your buyer will smell it a mile away. You have to be prepared.

There are tactics. Your tone of voice, your expression… all these things need to be carefully mapped out.

Take a step back. Straighten your tie. Change your way of speaking, get in front of the mirror if you have to.

Go to your notes, review your target – their pain-points and needs.

Now you have a winning mindset. And your palms? Why, they are as dry as a desert – and your thirst for that sale is now under control.