The 4 Key Traits of a Sales Superstar and How to Hire One (Or Many!) 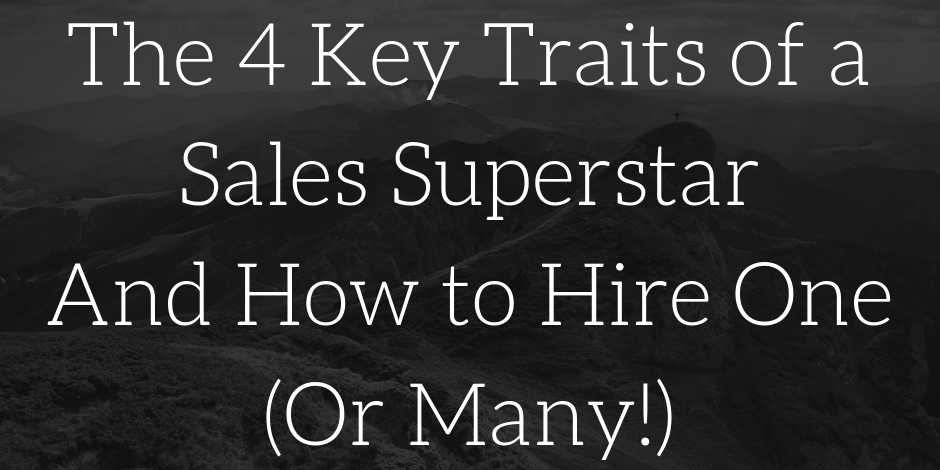 Let’s start this one with a little self assessment. If I set three different qualified candidates in front of you, but you knew that only one of the three would become a real sales superstar… would you know exactly what to look for?

I’m sure you know that a great company is only as great as its people. So you must also know that if you get the people wrong, you can forget about meeting or exceeding sales numbers.

The weight falls on you, the sales manager, to set the foundation for winning. But there’s good news here: while you may not be good at spotting the 4 must-have character traits of the Sales Superstar during a 1 hour interview right now, you’ll get better. And this article will help you along.

I want you to nail this interviewing piece, so I’m including specific interview questions that are guaranteed to pull out the revealing response you’re looking for.

The Sales Superstar’s self-awareness carries over into every conversation with you, making assessments more valuable, and translates into better numbers as they accurately navigate their opportunities and potential pitfalls in real time with a prospect.

A sales team candidate who is interested in goals but not cognizant of where they stand is a person who is at best misinformed, and at worst, delusional. The truth is that most people have a high opinion of themselves, thinking of themselves as better than average in practically every department. It is the person who can soberly (and humbly) self-assess that will be the greatest asset to your team. But how to find the Superstar?

As the sales manager, you’ll need to tap into your candidate’s vision of themselves and see with clarity that they desire and earnestly seek personal and professional growth in their lives.

But before you blunder and ask your candidate something disastrously cliché like “Where do you see yourself in 5 years?”

“What is one skill you’d like to improve on professionally? Personally? What are some steps you’re taking now to get there?”

Asking this, you’ll get intel on who they are now, where they want to be, and what it will take for them to get fulfillment from their work with you. Notice I snuck a question in about personal skills. Why? Because if self-awareness is authentic (not just put-on for the interview) then that will flow naturally for them too. They’ll have something they’re excited about that’s just on the tip of their tongue – like their new foray into learning piano, for instance. People who are self aware and dedicated to growth are commonly known as “Sales Superstars.”

For the Sales Superstar, the sense of urgency around success isn’t merely tied to making quota or meeting a deadline — it’s a way of life. They directly identify with winning, to the point of it being an obsession that they can’t shake. They know there is really only one #1, and they sure as heck aren’t after participation points. Awards for participation make them cringe. And when they win (they always do) they don’t rest on their laurels, they’re already thirsting for their next win.

Other bright-eyed sales candidate (not the superstars) may claim to be interested in competitive excellence, but competing interests will often win out in their psychological tug o’ war. When stunning success isn’t directly tied to their identity, other priorities like being the most well-liked can stunt their professional growth.

As a sales manager, you must look for a highly-competitive desire to win during the interview.

“Would you rather work as a team to ensure everyone is hitting their numbers (quotas), or would you rather focus your energy on becoming the best salesperson on the team and achieving higher numbers than your colleagues? Why?”

By asking this question, you’ll separate the wheat from the chaff.

A Sales Superstar is focused on the tasks that move the needle. They manage their time exceedingly well, and always seem to have a little extra energy remaining at the end of the day. They may get frustrated if they’re expected to do tasks outside their wheelhouse, but if they’re forced to tow the line, they’ll find a way to quickly get it over with.

Their personal notebook reveals an impressively organized and methodical approach to making sure the things that matter get done. Their personal standard, their default mode, is impeccable.

Your candidate may be an all star in every arena, but if they lack this one trait, move on. While other habits may be trained with time, the trait of competency is crucial and often innate.

“What are some daily routines you keep at work?”

Asking about routine will reveal the habits that are the underpinnings of the competency trait. Beware the sales candidate who says they take each day as it comes. Rather than hiring the hectic, frantic, fly-by-the-seat-of-his-pants “talented” one, you want the genius who makes it all look easy… the Sales Superstar.

#4 Integrity in the Face of Temptation

When faced with taking the easy path and doing the right thing, the Sales Superstar can be counted on to maintain high levels of integrity. With great power comes great responsibility, and these people live by it. They speak the language of integrity to the others, and it strikes a chord. People buy from them, but aren’t sure why. But we know why. It’s because a clean approach to business breeds trust, influence great enough to do million-dollar deals on their word alone.

A lack of integrity in a sales candidate can be difficult to spot at first. Petty company theft isn’t our concern here; rather it’s the micro-decisions made by a salesperson that can cost a company over time.

Integrity matters. Go with your gut on this one, and try not to be too swayed by charisma and flattery. Many sales managers have fumbled by hiring someone who is focused on cutting corners to get ahead. Your company and prospects deserve better.

“Tell me about a time you broke the rules, but it all turned out for the best?”

They say rules were made to be broken. This admittedly loaded question is designed to reveal what kind of rule breaking your candidate does. Smirking, they may take the bait and share something that would have been grounds for termination on your watch. But the Sales Superstar will use this as an opportunity to share when they went above and beyond, and with exceptional performance re-wrote the rules. They may reveal an uncommon courage to go the extra mile. Hire for someone who will set a new standard on your sales team.

Now think about those three imaginary candidates again. And review these four traits in your mind. Evision sitting across from the person who embodies them all. Now, doesn’t that feel good? That’s how it should feel, that’s what it’s like to work among the best of the best. Now go and hire for it.

Here at C-Level Partners, we deliver qualified sales appointments on demand, so that you can focus on closing deals and dominating your space. Working with us is like having a whole team of sales superstars. We’ve trained for it. Get in touch and we’ll put you in front of the right people, in the right role, right now.