The Role of the SDR in Sales, and Why You Can’t Live Without Them. 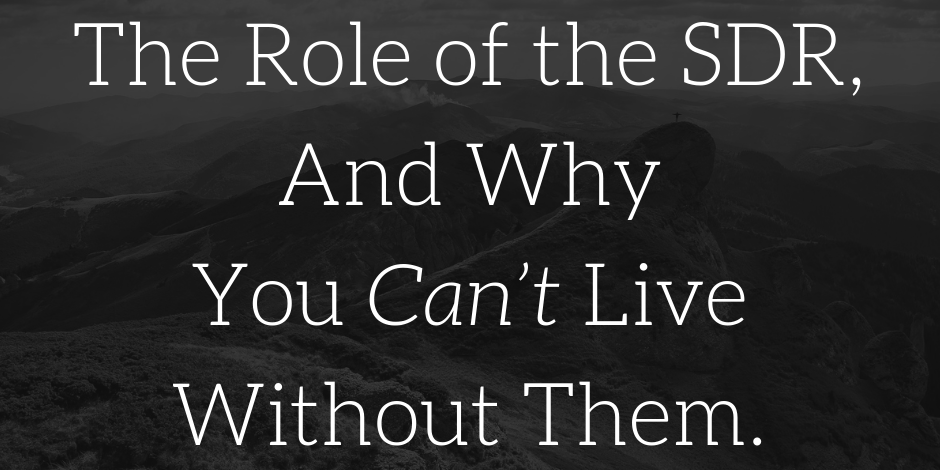 The sales development representative — or SDR — has recently come under fire by many in the sales world. Why? Because apparently, they don’t “add value” to the sales team. I want to call BS on this and highlight exactly how they deliver tremendous value, and why you need SDR’s on your team.

But first, there’s a fascinating social experiment organized by the Washington Post that we should consider before digging into the role of the SDR.

On one cold January morning, in a Washington D.C. metro station, a man began to play his violin. In 45 minutes time, he played six Bach pieces — to perfection. It was rush hour, and likely thousands of people heard his playing as they hurried by to their destinations.

Little did they know that the man playing was the world-famous Joshua Bell. A violinist who had sold out a theater in Boston just two days prior, with seats averaging a hundred bucks a pop.

And in his hands, a Stradivarius violin… worth 3.5 million dollars!

Undoubtedly the majority people who heard him that day had never heard, nor will ever hear again, such mastery live and in person.

We all know that people will part with large sums of money, but not without proper context.

A legend like Bell proves this. But it applies perfectly to the sales world, too. Without proper context, and more importantly, without your busy prospect’s full attention, it does not matter:

If you have not won the prospect’s time, and their undivided attention, you’ll never get them as a customer or client. In other words, a good deal of the close is made before the meeting ever takes place.

With this in mind, some say the SDR’s appointment-setting is the most important close, as it turns a nameless prospect into a ticket holder, if you will. The SDR cuts through the frantic chaos of that person’s day. Snaps them out of their mindless auto-pilot. Demands their attention. And urges them to stop and listen, if just for a minute — as sometimes a minute is all they need to sell that ticket to your show… to put the closers in the spotlight. Are you tracking?

Perhaps that’s why many who work with the 1% see SDR’s as tried and true salespeople. The higher up any ladder you climb, the air grows thin, and you’ll see the same thing happening:

Money is not the limited resource. Time is.

Why is it that so many business people invest in private jets? “Take my money” they’ll say, “but do not — under any circumstance — make me wait.” With the sole focus of outbound prospecting and appointment setting, the SDR is your bannerman, the one who sets the tone and sets the table. They know how to make an executive part with their most limited resource, which requires more EQ than many sales people have at their disposal. So if time is money, the SDR is pivotal in filling your pockets.

It’s a noisy world. We live in what some call an “attention economy.” In other words, attention is a scarce commodity. So one thing that makes the great executives successful is that they tune out the noise and focus their mental bandwidth on activities and thoughts that are deliberate and intelligent. The SDR knows this and sets their sights on qualifying the leads, so no one’s time is wasted. Moving a lead to prospect status, and then further down the funnel, can often be a game of inches. The good SDR’s do such a great job of this that the only thing that could tank a sale is a Sales Rep’s own fumble.

Showing up to a sales meeting means the prospect is trading the value of their time (worth more than yours) for something they’re not yet convinced of.

Joshua Bell’s time is calculated at being worth $1,000 per minute. But at a high cost to his ego, the thunderous silence of commuters between songs certainly dealt a blow. Before the Sales Rep sits with the prospect, it’s the SDR that has built the trust – and has made their willingness to be sold to quite apparent. Knowing they’ve been qualified, the prospect’s vulnerability here is astounding. The Sales Rep, who holds the floor and the prospect’s attention, is undoubtedly given the upper hand because of the SDR’s efforts. Now it’s time for what you might call the second close.

Question any of the people in the metro about their appreciation of beauty, artistic knowledge or good music, and they would likely be offended at the mere suggestion that they aren’t sophisticated enough to know a good show when they hear one. Many of the pedestrians interviewed have become so excellent at navigating their commute on autopilot that they did not remember Bell at all. But put him in a room of critics, and they’ll say things like “Delicate urgency.” “Masterful intimacy.” “Unfailingly exquisite.” “A musical summit.” “. . . will make your heart thump and weep at the same time.”

A great SDR will have “set the table” as I mentioned, which means the prospect will have come to the table mentally prepared for the occasion. So long as the SDR and the Sales Rep are on the same page, the prospect will be eased into the sale and everyone will come away happy. But shock the prospect with new information, and you’re almost sure to lose the sale.

SDR’s turn leads into prospects, or ticket-holders, if you like. And the register “cha-chings” with each qualified sales opportunity booked. It is then that the Sales Rep must play to the critics and the well-dressed, discerning crowd of onlookers, and put on the show of their life.

So you can get out your Stradivarius and your Bach sheet music, but you’ll see it’s a cruel world in the end. You’ll be wishing you had an SDR. The SDR’s role may remain in the shadows, but it’s the SDR that gives the sales reps the spotlight they need and the applause they deserve, never having to waste a single note on someone who is not the right person, ready and willing to hear.

Is your sales team stacked with quality SDR’s? If so, maybe you’ll start seeing them in a whole new light. Because the truth is, a well-trained SDR is an integral part of any team, especially if you’re giving them the tools to succeed.

If you don’t have SDR’s, hopefully you’ll consider bringing one or more onto your team. And in the meantime, don’t forget to drop by C-Level Partners for more articles on all things sales and business.