The Top 3 Lead Generation Mistakes That Are Costing You 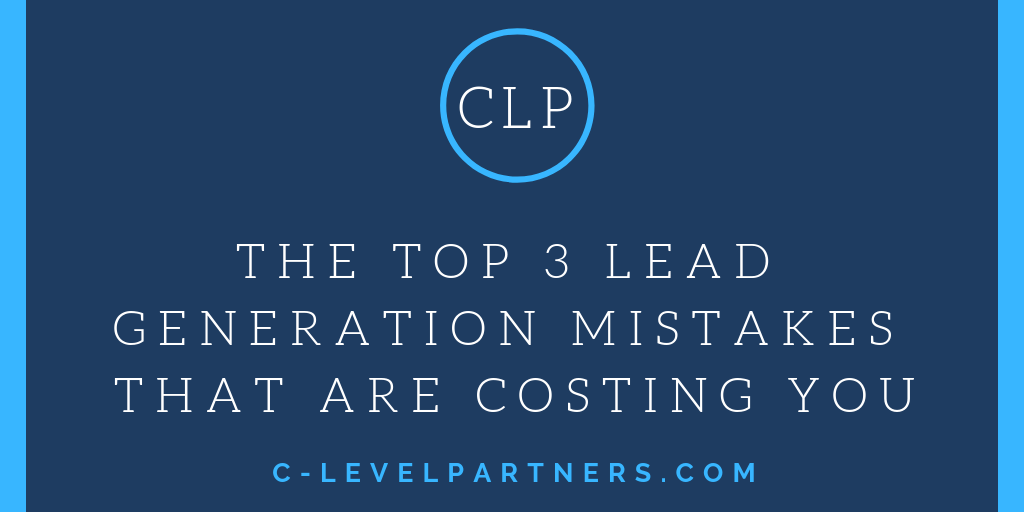 The lazy manager looks at the “Lead Generation” line item on his company’s expense report, shrugs his shoulders, and looks away. “What difference does it make,” he says, “…as long as we’re coming out ahead.”

What if I told you the loss of margin in the sales process is not always found in the deal-scraps on the cutting room floor?

It’s true. Big losses are more commonly found in the everyday moments of neglect — where a manager favors business-as-usual over what could have been their best year ever. Don’t be that manager.

These are the three costly mistakes or pitfalls, hiding in the shadowy back alleys of your company’s lead gen activities.

Nobody wants to admit they’ve hired the wrong person for the job. It’s a crying shame to look around and see that you’ll never reach your goals because your staff lacks the skills or motivation to make it happen.

But rather than “drain the swamp,” sometimes all it takes is a good re-shuffling of the deck. It could be that you have the wrong sales people in the wrong roles.

For example, sink your teeth into this for a moment: Your inside sales team is not your outside sales team. And visa versa. These are two completely different skill sets. And they must be treated as such.

Let’s take a look at the definition, per Investopedia.com:

Look, I know that you know the difference between the two…

But take a moment to see just how different these two responsibilities really are. Now ask yourself, do you have the same people on your team doing both? If so, chances are they’re spread too thin and are not nearly as effective as they can be.

Rather than worrying about how a staff member may be under-performing in one area or another, maybe it’s time to address the elephant in the room: they are in the wrong role!

And it could be an instance of bad hiring. Filling sales roles is an art and a science, you need to ensure you have the right hiring strategy and tactics to identify who will be successful in the role you’re hiring for.

If I caught you red-handed for bad hiring, here’s how to turn things around.

Here’s a little secret about training sales staff: education has diminishing returns. That’s right, there comes a point where training will actually hurt rather than help your staff. The fact is, real learning doesn’t happen by sitting through lectures and watching sleep-inducing PowerPoint presentations.

While training does have its place, it’s often far better to learn while doing… to hit the ground running.

So if your sales team is stuck in yet another sales training… I can almost guarantee that it’s crushing their spirits like tamed lions. They are slowly forgetting the thrill of the hunt.

There are real-life sales to be made just outside the four walls. And instead of boring your lions to death like a zookeeper, why not start training DURING the hunt? Let them loose and do what they love.

Otherwise, you’re sure to waste working capital on redundant or ineffective training. And you’re sure to be letting good deals die on the vine. Don’t do this.

Stop spinning your wheels with endless sales training, and start getting after it. Because let’s face it, you simply cannot deposit training or good intentions in the bank. But you can deposit the sales your team makes TODAY. Again, it’s a fine line. Train your team to a point, then allow them to be salesmen and saleswomen.

Here are a few resources to help you along with this:

Maybe you’re thinking, “It’s not me, it’s THEM!” Marketing just isn’t giving you the quality leads you need. Or the lead sourcing whizz-pop service you ordered is busted. To put it bluntly, you’re probably wasting time on unqualified opportunities.

What makes a lead unqualified? Well, many reasons that I’ll cover in another article. But in a nutshell, unqualified leads are a) not the decision maker b) don’t have the budget c) are not in control of their own buying cycle, etc.

While you may be feeling stuck, at least you’re not alone. As one of the biggest challenges facing CEOs, lead generation always emerges as a top contender.

So it’s time to stop barking up the wrong trees and getting shut down by unqualified leads, day after day.

If you know for sure that you’ve been wasting your time chasing rabbits, it’s time to step back and re-evaluate how you qualify a prospect as your buyer. Here are some resources to help you on your way:

So there you have it, the 3 common mistakes that are likely killing your lead generation success.

Whether its bad hiring, over-training, or not qualifying leads, there are many ways to go wrong. Follow the traditional so-called lead gen wisdom… and you’ll end up chasing your tail when it comes to hitting your numbers.

Or, team up with us and we’ll put you in front of your ideal customer, the ultimate decision-maker, faster than any channel you’ve ever tried.

Feel free to get in touch to learn more about how C-Level Partners can put some serious firepower behind your lead generation process.